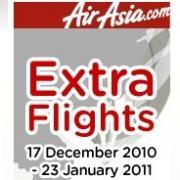 For travel between Jakarta and Bali, 3 more daily flights have been added. The new flights depart at 8:25am, 5:20pm, and 7:20pm. Additionally, they have added a Tuesday/Thursday/Saturday service departing Jakarta at 4:00pm. One-way fares during this travel period start from IDR390,000 (USD42).

For travel between Jakarta and Singapore, 1 daily flight departing Jakarta at 12:45pm has been added. Additionally, they have added Tuesday/Thursday/Saturday service departing at 8:35pm. One-way fares during this travel period start from IDR483,000 (USD54).

AirAsia is a budget airline with flights to 12 destinations in Indonesia. Quoted fares are the lowest one-way rates available during the period from December 17, 2010 – January 23, 2011 and are subject to availability. Quoted fares do not include electronic payment fees or checked baggage.

For the complete schedule of these additional flights or to make an online booking, visit the AirAsia Indonesia website.